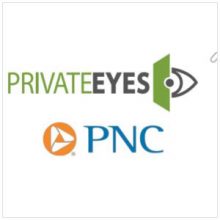 A STANDARD OF SERVICE: PRIVATE EYES INC. AND PNC

When Sandra James Founded Private Eyes, Inc. in September 1999, she was well aware of the market trend emerging in background checks and employment verifications. Since James had already owned and sold a business specializing in mortgage credit, she saw the opportunity for a seamless transition to providing Fortune 500 corporations, particularly creditors and financial institutions, with background checks and employment verifications.

Despite working in a fast turnaround environment, James, President & CEO of Private Eyes, insisted on one company value where human interaction came first- a dedication to customer service as a selling point, not an expense.

“At [the 2008] conference, I learned the value of this network. WBEs help each other, and the WBENC network brings a camaraderie that is priceless.”

From the very beginning, I knew it would be less expensive to send call through voicemail and into a queue, but i wanted our company to stand out by offering an additional service- and that’s why you can always talk to a live person at Private Eyes from 5 a.m. to 5 p.m. PST, “ says James.

It’s that standard of service that has gained James’ clients across the nation, including most recently WBENC Corporate Member PNC, which employs Private Eyes to verify employment and income requirements for lending products and home mortgage applications.

The road toward this project started when James met the PNC supplier diversity team during the 2014 WBENC National Conference & Business Fair (NCBF) in Philadelphia.

“It wasn’t an immediate contract,” says James. “When we first connected, the PNC team were interested in other services through the Private Eyes sister company, 4506-Transcripts.com. Then they approached me for employment verifications for lending products through Private Eyes. We just finished a pilot program with them in August where we scored 100% in meeting our service level agreement.”

Headquartered in Walnut Creek, CA, Private Eyes became WBENC-certified in 2002, and James has been a committed local member with her RPO Astra since then. Yet it was being part of the host committee at the 2009 NCBF in San Francisco that made her a true believer in the robust WBENC network.

“After 2008, it was a rough time in the marketplace,” says James. But at that conference, I learned the value of this network. WBEs help each other, and the WBENC network brings a camaraderie that is priceless.”

James counts many in the WBENC network among her clients, including WBENC Corporate Member Entergy and WBE Pinnacle Group. In addition to sponsoring NCBF multiple times, she has served on the Women’s Enterprise Forum as well as the current WBENC Board of Directors. As for advice, she says her most important tip is not to expect a contract with certification.

“Of course all of us WBEs want a contract,” says James. “But the value of having the WBENC Certification has so many more layers. Certification gets you access but you make the rest happen.”

John Szpak, Vice President of Sourcing and Procurement at PNC, echoes James’ sentiment that whether a company is women-owned or diverse-owned, companies should not lead with certification, but with capabilities.

“We work to give everyone opportunity to win business, but you have to tell us what you can do- and what sets you apart,” says Szpak. “Also, know our strategic objectives. Even though you may not be as large as our incumbent, your flexibility, capacity, and focus on customer service may be a big selling point. Being honest is the best way to drive business.”